Jesus had been down in Judea out in the countryside with his cousin John: the baptizer, the testifier, the voice of the one crying out. After his encounter with Nicodemus, Jesus went out into the countryside to where John was, a little town called Aenon near Salim. Aenon literally means “spring” or “natural fountain,” an apt description apparently because the evangelist notes that Jesus was there with John

“…baptizing at Aenon near Salim, because water was abundant there.”

Water was abundant there. Depending on your perspective, abundant water sounds kind of subjective, doesn’t it? Growing up in Melbourne, I spent a lot of time at the beach, sitting on my surfboard in the Atlantic. Maybe you prefer the Gulf, broad and calm. You might picture one of Florida’s thousand lakes, large or small. That is some abundant water! Or, have you ever been to a water park, and stood under one of those buckets filled with 10,000 gallons of water that gets dumped on your head. Or have been to one of Father David’s baptisms. Now, that is an abundance of water.

But it’s all subjective, right? Have you ever travelled to a desert or some other place where water is scarce? My friend tells the story of some time spent in Kenya in a part of that country where you weren’t supposed to drink the water before you boiled it and tested it, and did all sorts of stuff to it. He recalls coming across a bottle of water – just a normal half-liter, 16.9-ounce bottle of water. It was still sealed, pure, and filtered, clean and ready to drink. He recalls twisting open the cap and drinking deep. It was an abundance of water.

We don’t know exactly how much water Jesus and John and the disciples had as they were splashing about in the baptismal waters of Aenon near Salim, but we know their subjective view because the narrator tells us “water was abundant there.” Now, word got to a group Pharisees about Jesus and John baptizing at this little sacramental oasis, so Jesus left Aemon in Judea and started back to Galilee. And this is where our lesson picks up today, with Jesus deciding to pass through Samaria and arriving at a city called Sychar (Jn 4:3-5).

The narrator notes that Jesus was “tired” (Jn 4:6). He had just traveled a distance, perhaps 20 to 30 miles, so of course he’s tired. It says he’s tired so he sits down at the well (cf. Jn 4:6). This is a bit of the great narrative irony that can be found in John’s gospel. Jesus had just come from a place with an abundance of water, and now he’s sitting down at a well which is kind of the opposite of that, a place where you have to dig deep in order to lower a bucket to an unknown, unseen stream. I think it is safe to say that water is no longer abundant there.

So, Jesus came to Sychar, a Samaritan city, and he was tired. He sat down at a well, and, as he was sitting there, a woman approached and Jesus asked her for a drink. When Jesus asked for this drink, the unnamed woman at the well in Samaria, she was understandably wary, for

“…Jews do not share things in common with Samaritans.”

Jew and Samaritans had an ancient animosity. Following the conquest of the northern Kingdom of Israel by the Assyrians in 721 BC and the deportation of its inhabitants, there was an influx of foreigners into the region of central Palestine known as Samaria (a story told, in 2 Kings 17). While these newcomers to some extent preserved the religion of the previous occupants (ie. Israelites), the remaining Jews regarded their beliefs and practices as polluted by pagan and therefore illegitimate practices. A particular source of aggravation was the setting up on Mount Gerizim of an alternate, rival place of worship to the temple in Jerusalem. This and other factors led to hostility and social separated which is summed up in the woman’s response to Jesus, “How is it that you, a Jew, ask a drink of me, a woman of Samaria?” And thus the narrator’s explanation that Jews do not share things in common with Samaritans.

Sister Helen Prejean
Sister Helen Prejean is the Catholic nun, member of the congregation of Saint Joseph, who wrote the book Dead Man Walking, the story of her experience as a spiritual advisor to a man on death row. We might assume that Sister Helen ended up in this position because, well, she is a nun, and don’t nuns often end up serving the people no one else will?

But Sister Helen’s story is much more complicated than that. She grew up in a warm, loving Catholic family and decided at an early age she would become a nun. When she joined an order, she was determined to be the most pious, most obedient, most prayerful nun — she was seeking perfection… until the church and the world around her began to change. During the civil rights movement, many nuns from the US went to Latin America to work with those who were living in poverty, and eventually, Sister Helen decided that a cloistered life of prayer wasn’t her calling. She developed a passion for working with the poor. She moved into the housing projects in New Orleans and began to engage the people who live there, to really get to know them. And from these people whose backgrounds and lives were so different from hers, she learned about what she describes as the other America where people navigate the world without connections that offer a layer of protection from consequences, where people don’t trust the police and where the police don’t trust the people. And for the first time, she realized, she wasn’t so virtuous, she was protected, and cushioned, and resourced.

One day, she walked out of an adult learning center in her neighborhood, and a man called out to her. “Hey, Sister Helen!” He carried a clipboard and was approaching everyone on the street. “You want to be a pen pal to someone on death row?” he asked. She didn’t know much about the death penalty, but she knew if someone was on death row, then that someone was poor, and she was called to serve the poor. Besides, how hard could it be to write a letter? She’d been an English major after all!

She describes this as her first encounter with “Sneaky Jesus,” the Jesus who sneaks up on you and draws you in with something that seems harmless enough. I’m only writing a few letters, she thought, but then she got a letter from her pen pal on Death Row, a man named Pat Sonnier, saying he never had any visitors, so she went to visit him. And then Sonnier asked her to be his spiritual advisor, and she said yes, not knowing that when he was put to death, the only person who could be with him all the way to the end was his spiritual advisor. Sneaky Jesus meets us where we are and draws us to places we never thought we’d go. That day on the street, signing her name to that clipboard, Sister Helen could not have foreseen that she would be the face of love that Pat Sonnier saw as he was put to death, or that his life and death would ignite in her a calling to speak out against the death penalty and for the love and forgiveness of all God’s children.

When Jesus and this unnamed woman meet at a well in Samaria, they are understandably wary of one another. Jesus has walked a long way on a hot, dry day, and, being human, he is tired and thirsty. This woman is by herself with a jar at a well — the ancient near east equivalent of a singles bar — and she is naturally suspicious of the man who asks her for a drink. She is especially suspicious because she can tell he’s Jewish. Remember, Jews and Samaritans were deeply mistrustful of one another, even though, to us, the differences between them seem pretty trivial — a disagreement over where they should worship God. But, as we know all too well, even a seemingly trivial difference can create major boundaries and mistrust between people.

Fortunately, Jesus fails to follow the culturally acceptable script. Instead of refusing to interact with the woman simply because she is a Samaritan and a woman, he engages her. He speaks to her, he listens to her, he sees her as more than her labels. All of which allows her to see beyond that Jesus is Jewish and a man. As they talk, she discovers that this tired and thirsty Jew is not just hanging out by a well waiting for someone to give him water. He knows things. He speaks in metaphors. He offers her water — but not the usual kind. He speaks about God in ways she has never heard before.

Most remarkably, he is unafraid to talk with her, utterly unashamed by their encounter. He welcomes the opportunity to engage her, to converse with her, in spite of the things that should divide them from each other. In the end, their conversation is the longest recorded conversation between Jesus and any other person in the New Testament. The woman leaves transformed — inspired to share the good news of this unlikely encounter with her community, the news that there is more to God than worshiping God in the right spot, the news that God might just be bigger than they thought, big enough, in fact, to hold together Jews and Samaritans and Gentiles and Romans and Presbyterians and Methodists and Baptists and Catholics and Muslims and Buddhists and black and white and native and immigrant and laborer and even Democrat and Republican! God can hold us together — and if we are willing to engage one another beyond all that divides us, we will be transformed.

Oh, and notice as well the time! The narrator tells us,

“It was about noon.”

Maybe the narrator is trying to tell us that the noon sun is shining at full volume – something we know full well from our experience of Florida’s summers. Maybe the narrator is simply trying to tell us that the temperature is at its zenith and that shadows and shade are scarce. There are fewer places to hide from the blazing sun! We don’t know for sure that that time of day had a tremendous effect on the realization of thirst, but we do know for sure that it had something to do with quenching it.

You see, a few chapters later in the Gospel of John, Jesus will have been betrayed, arrested, and denied. Jesus will have been beaten, mocked, and struck repeatedly. Jesus will be hurting. He was with Pilate. Pilate was talking with Jesus, but Pilate was also talking with the assembled crowd. And the crowd had a hunger on that day. They seemed to be extra hungry for something on that day. Because when Pilate told them he found no case against Jesus, the crowd got angry and cried out: “Away with him! Away with him! Crucify him!” And so they led him out on a death march, carrying his execution on his back, feeling the effects of that abundant thirst. And the text says:

“It was about noon.”

“The woman said to him, ‘Sir, give me this water, so that I may never be thirsty.'” 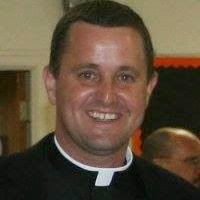